I feel like we have dealt with reflux since day one, literally. I remember it was in the middle of the night, I was lying in the hospital bed and I heard Juliette next to me in the bassinet choking on spit up. It happened several more times and I mentioned it to each of the nurses as they changed shifts. They all reassured me that it’s normal, that it was most likely fluid from being in utero.

And that friends was just the beginning of hearing “it’s normal.”

The days passed and we were trying to get the hang of breastfeeding. When Juliette was 12 days old we met with a lactation nurse because I knew something was not right with her latch and we continued to struggle. She took a quick peek in Juliette’s mouth and said, “Oh! Does she have a tongue tie?” She tried to get a closer look but Juliette wasn’t cooperating. She then asked me if she can stick out her tongue, to which I replied she could. The nurse said, “Then she isn’t tongue tied.” When she observed me nurse she noticed that Juliette tucks in her lips, therefore was not getting a deep enough latch. She instructed us to manually flange out her lips. I left the appointment hopeful that this would fix our latch problems, although she had planted the seed in my mind about possible ties.

We met with Juliette’s Pediatrician several times during the first few weeks of her life as she was not gaining adequate weight. At each of these appointments I would always mention the excessive spit up. We were, yet again, advised that it was normal for babies to spit up. We became extremely frustrated as we did not feel Juliette spitting up large amounts of milk all day long was ‘normal’. It was typical for her to spit up 4-5 times after each feeding.

Juliette was 2.5 weeks old when we went in for a weight check. We were told since she was not gaining weight fast enough that we needed to supplement. Her pediatrician suggested formula, but when I told her I preferred to exclusively breastfeed I was advised I could pump and give Juliette 2oz after each nursing session. At this appointment I had her mouth checked for a lip and tongue tie, but we were told she didn’t feel she was tied. Mothers intuition kicked in and I wanted a referral to an ENT for another opinion. So, Juliette was nursing every 1.5-2 hours, spitting up excessively, but now we were being told to give her more milk at each feeding? Can anyone see where this is going? A few days of supplementing went by and I ended up calling the office and having her see another doctor because the spit up was only increasing and becoming projectile. That physician said to stop supplementing as he felt it was only overfilling her.

We met with a local ENT Physician shortly after to have her assessed for ties. Ready for it? He diagnosed Juliette with an upper lip tie and a posterior tongue tie. He then asked me how breastfeeding was going. It so happened that by that time we had finally started to improve with nursing. He then said as long as breastfeeding was established and going well then it wasn’t completely necessary to have her ties fixed.

If I could somehow travel back in time to that exact moment I would yell at myself to get them fixed right then and there, no ifs ands or buts.

At Juliette’s 2 month appointment I, again, stated my concerns with her spit up. Her Pediatrician said we could try Ranitidine, an Acid Reflux prescription, to see if it helped. I was really conflicted with the medication because Juliette had always been what they call a happy spitter – it never phased her. And from what I’ve read, Acid Reflux medication does not prevent spit up, it only prevents discomfort from spitting up. But we were desperate and hopeful that it would help.

Sadly, a few months passed and we weren’t having improvement. I continued to do laundry every other day and wear spit up as part of my daily attire. We had burp cloths in every room and we were constantly changing her outfits and bibs. Juliette continued to gain weight at a slow pace. There were two weeks where she did not gain any weight and obviously that was very concerning.

I began to do more research and must have spent hours reading about ties. It was then that I knew we had made a mistake in not having it corrected. Juliette had every symptom: reflux, poor latch, gas, poor weight gain, etc. As I continued to read I learned that unfixed ties can cause several concerns later down the road including dental and speech issues. I called and scheduled the procedure. 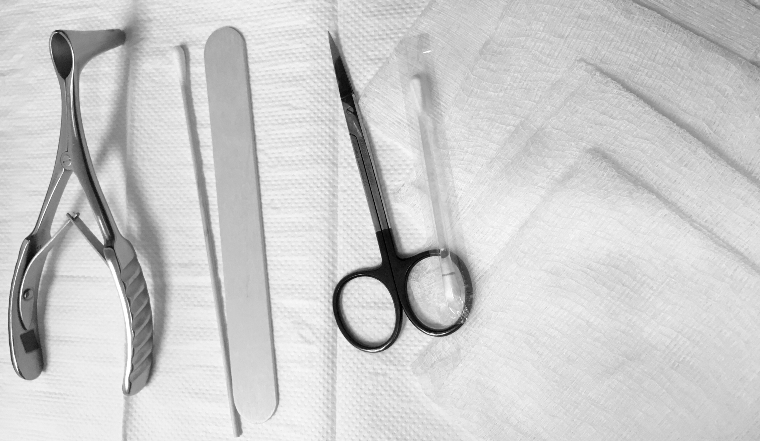 I was a big ball of anxiety all morning (all week actually!) leading up to her appointment. I felt sick to my stomach knowing that my sweet baby would be in pain. I had to keep reminding myself that this was for the best, this will help us. We dressed her in comfy jammies and headed out the door. I am eternally grateful for Joren, my rock. He held her during the procedure while I sat in another exam room, sobbing. I could still hear her hysterical cries as if I was sitting right there with her and I am pretty sure the entire clinic could. The doctor immediately brought me in the room once it was finished so I could breastfeed her. I walked in, sat down, and when Joren brought her to me he gave me a warning that there was a lot of blood. Because her mouth was numb she was having difficulty latching. She was screaming frantically and I was starting to panic. My chest and her face were coated in blood and saliva. After a few minutes of working with her she finally latched and nursed.

After the research we had done we learned that we would need to exercise and stretch Juliette’s mouth every 3-4 hours to ensure the ties do not reattach because of how quickly the mouth heals. This was repeated at every medical website and in every article I came upon. So after the Doctor came back into the room we asked about aftercare. He advised us that no aftercare was needed. I remember saying, “So we don’t need to stretch her wounds?” He said he has never had a tie reattach and it wasn’t necessary. We made our way home and we knew that wasn’t correct. There were many reputable physicians who specialize in ties that say the stretches are absolutely crucial. We followed after care instructions from Dr. Ghaheri, one of the leading Physicians in ties. It was then that I began to wonder if we should have went elsewhere for the procedure, come to find out Dr. Ghaheri is local to us. Go figure.

The exercises were absolutely heart wrenching for us and miserable for Juliette. She began to know they were coming and would immediately start to cry and turn away, which only made them that much harder. We continued the exercises for two weeks both during the day and night. It killed me to have to do the exercises in the middle of the night, but since the mouth is so fast healing Dr. Ghaheri recommends one stretch during the night, not going longer then six hours between stretches.

We are now two months out from having the revision done and in the end we are so thankful that we went through with it, no matter how miserable it may have been. In just 5 days after the procedure Juliette had gained 4.5oz. She has since gained 2 pounds! She went from constantly spitting up after each feeding to spitting up just a handful of times each day. It was a night and day difference. We have since switched Pediatricians and we couldn’t be happier with the new care. She reassured us that Juliette is right on track with growth and she had no concerns whatsoever. She also told us to stop the Acid Reflux medication as she does not feel Juliette needs it. We are so thankful!

I will be adamant in having our futures babes looked over right away and having any ties revised immediately. With all of the research I have done I have found that most Pediatricians are not educated in ties and that is very unfortunate. The impact of these ties were so incredibly significant and having them corrected made the world of difference in breastfeeding and in Juliette’s reflux and weight gain. Please, if you feel your little one may be tied don’t be afraid to seek an opinion with a preferred provider in ties and do your research. It could make the world of difference for you and your babe too!