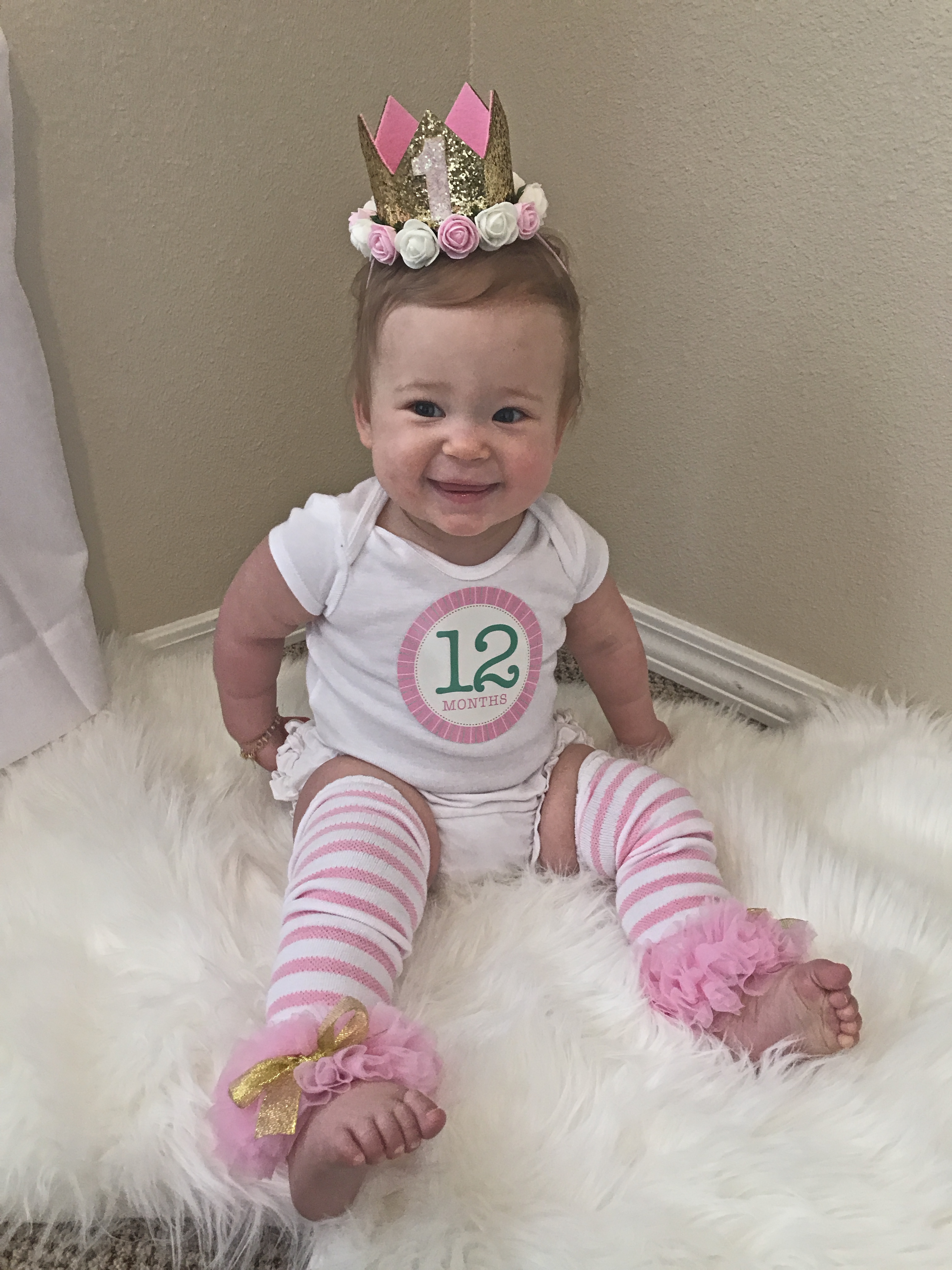 Cue the tears! I’m bursting at the seams with love and pride for my ONE year old! It has been 12 months of cuddles, laughter and tears. 12 months of learning about each other. 12 of the best and craziest months I have ever had. And this is only the beginning!

It fascinates me how quickly Juliette can pick up on things. I know every parent must say their kid is a genius, but really! She’s so smart! She can sign please, eat, milk, and more and has begun to string 2+ signs together. She puts her hand on her head when we say “oh no!” and she waves, claps, blows kisses, gives cuddles and kisses, and lays down when asked. She has begun to use objects correctly like brushing her hair, brushing her teeth, and pointing the remote at the TV. She has figured out how to turn on the xbox and knows how to work our iPhones! She likes to help get dressed and extends her arms and legs for us. Juliette is definitely our feisty wild child. Diaper changes are becoming quite a battle. She loves to do things ON HER OWN! She points to what she wants and signs please. 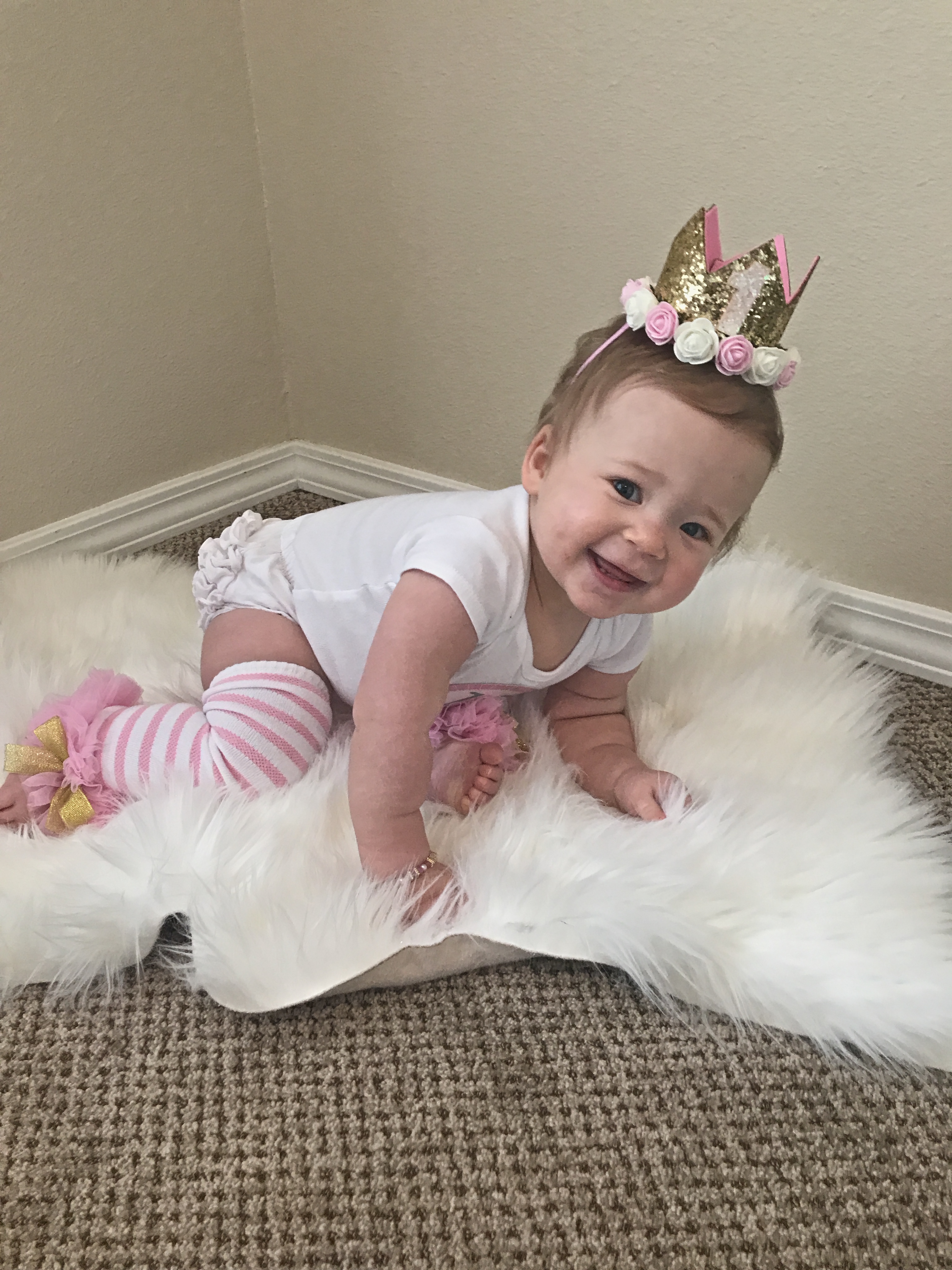 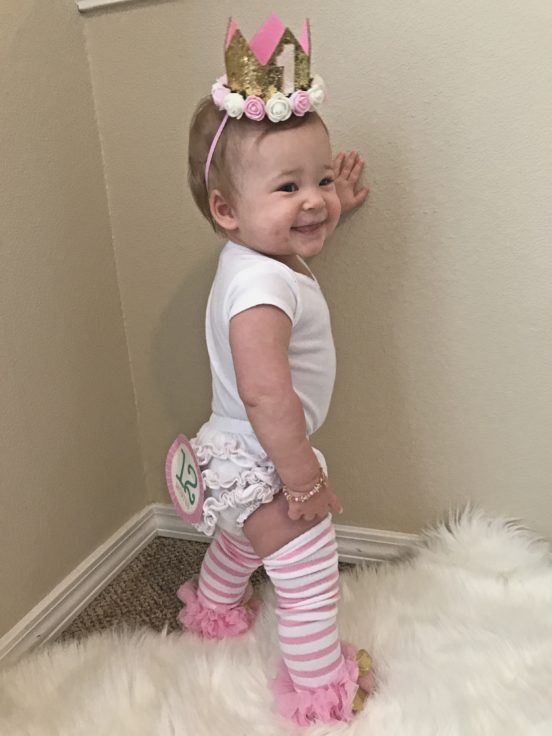 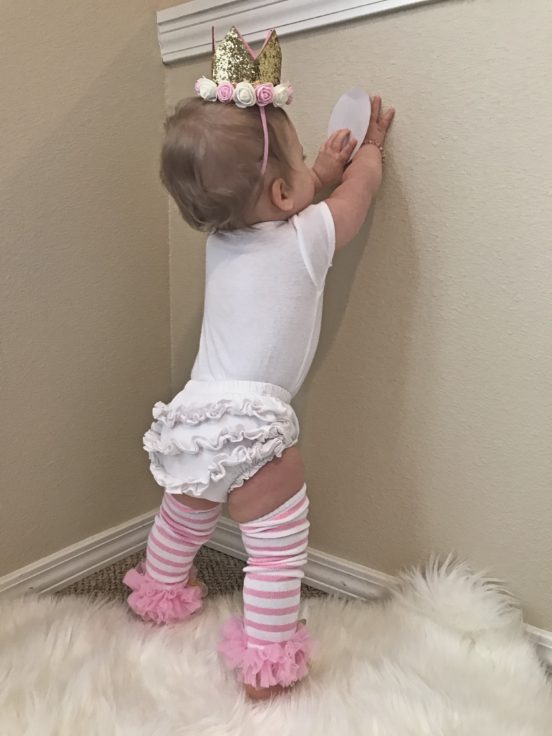 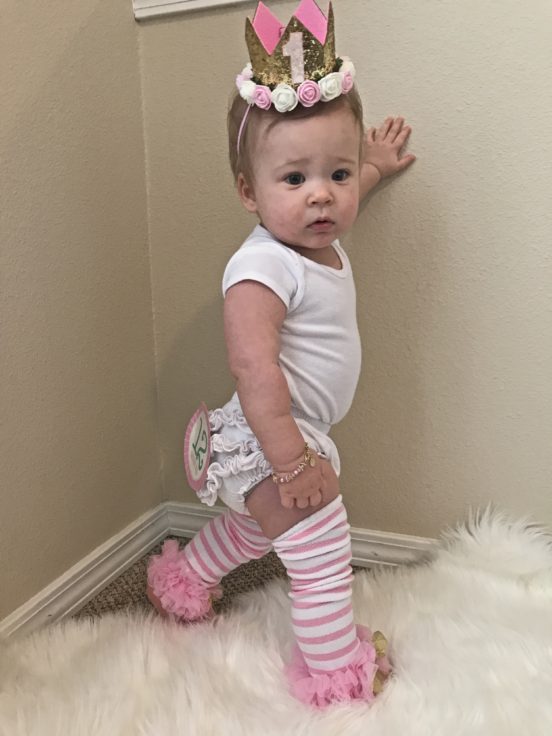 Juliette has not taken any steps and doesn’t seem interested as of yet but I feel it won’t be much longer until she gets brave and figures it out! She can stand momentarily without support, crawls super duper fast, climb stairs like a spider monkey, and walks along furniture at lightning speed. She loves to explore everywhere and does not like to be contained for long! Oh, and she still loves doing her baby yoga! 😉

Juliette still has four bottom teeth but we are SO close to cutting her first upper! Juliette is still a relatively good eater but these past few weeks her eating and food patterns have varied. I’m not sure if teething is the culprit. She eats whatever we eat along with her “smoothies” here and there. She prefers to feed herself and likes to try and use utensils. She has begun to test us at mealtime, trying to lift up her bowl and drop food and her sippy on the ground. She loves all fruit, most veggies, and one of her favorite foods is hummus. She isn’t the biggest meat eater but we’re working on it! 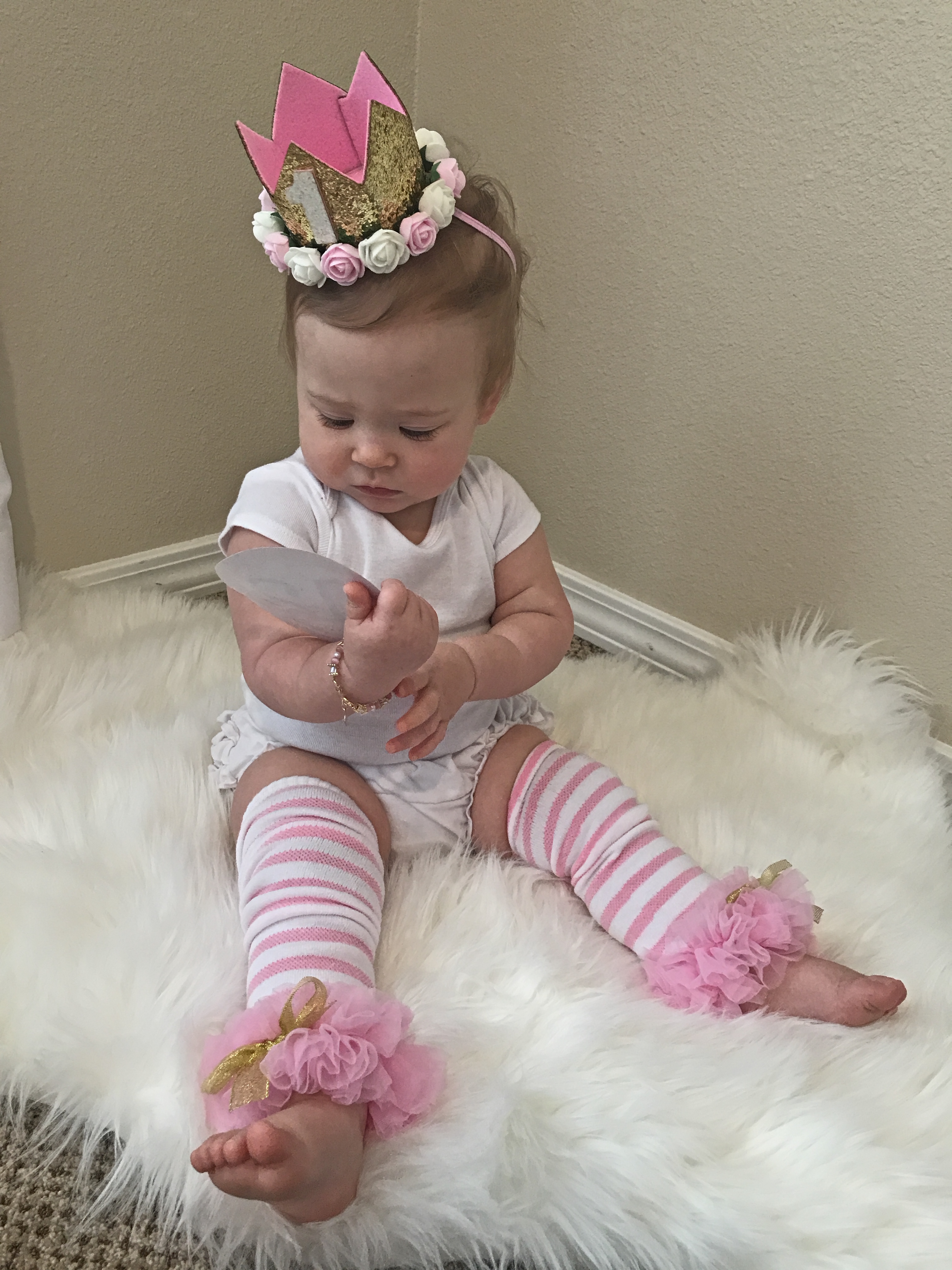 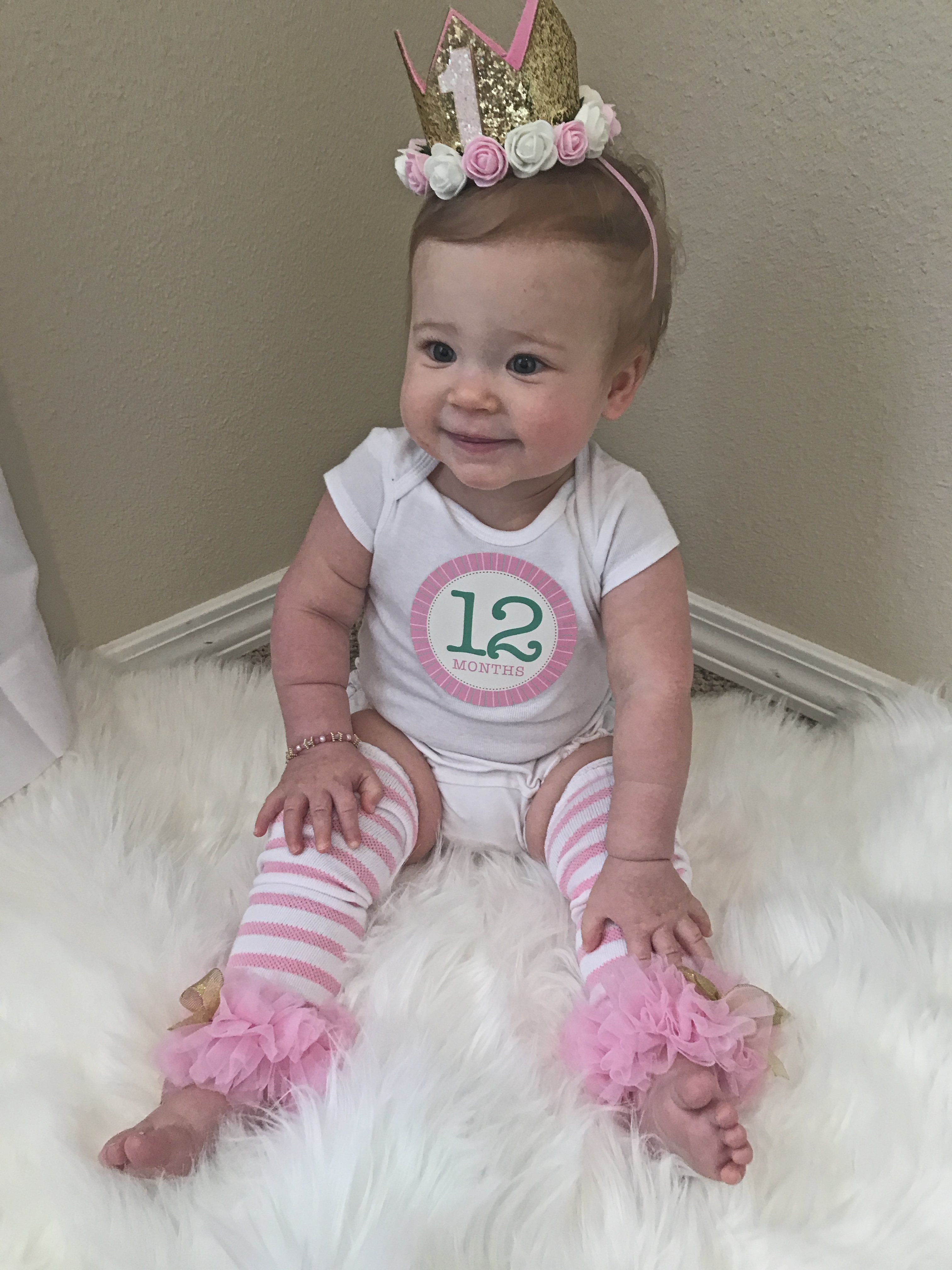 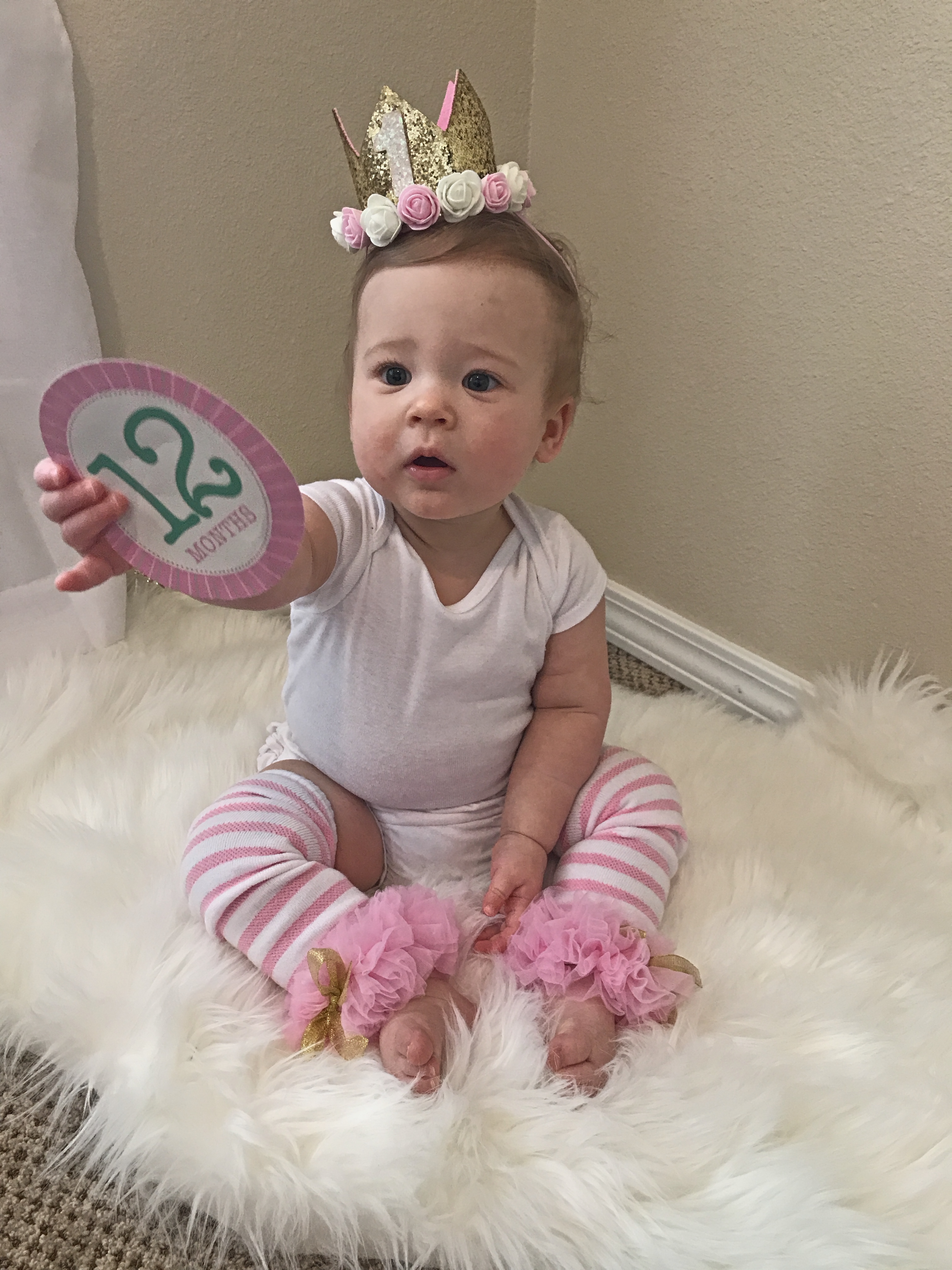 I am thrilled that we made it to my goal of breastfeeding for 12 months! It was very important to me and I am proud to say that we did it, especially looking back at the struggles and challenges we had the first few months. At this point I will leave it up to Juliette as to when she wants to stop. Things haven’t changed too much – I am still nursing on demand and she still does not like to nurse away from home or with a cover *sigh* What am I going to do with this girl?! She always signs milk immediately when she wakes up and sees me, so I’m curious to see when we wean. I do plan on starting her on whole milk during mealtime once we get the go ahead at her 12 month wellness check. 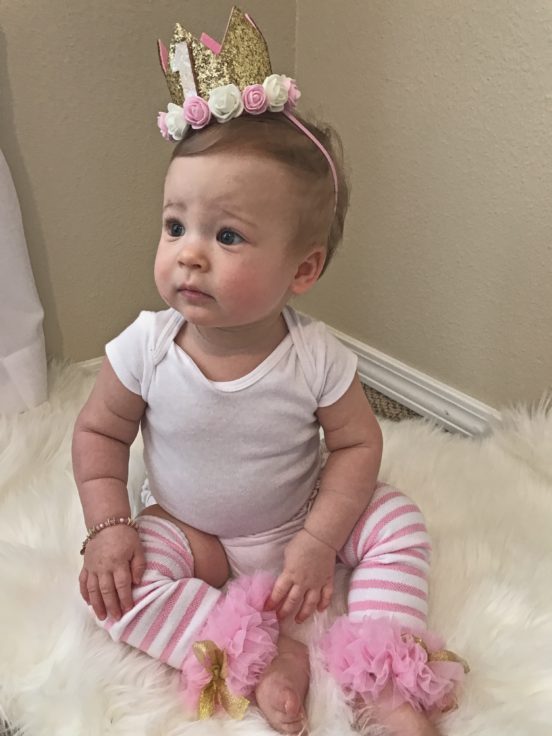 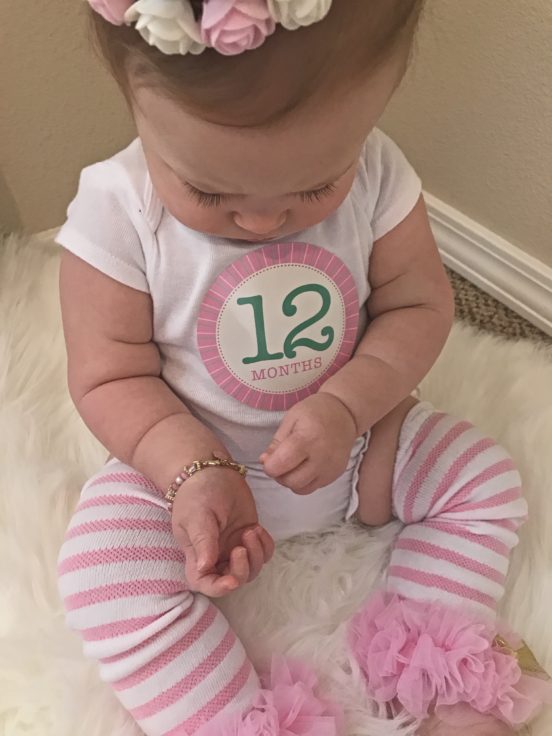 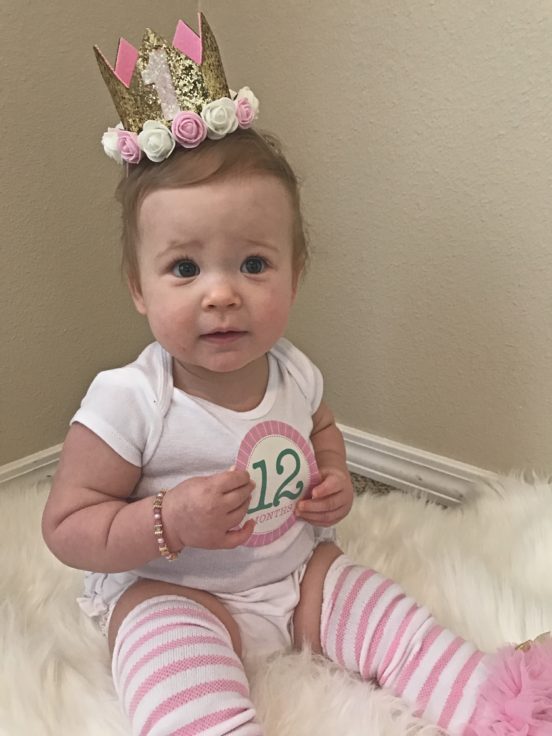 I was telling Joren last night how I couldn’t believe I have been nursing Juliette around the clock for one entire year. No wonder I’m tired! Yes, you read it. Juliette still isn’t sleeping through the night and she still nurses during the night. I’ve tried to break it but nothing seems to work. We were getting to the point where I would let her cry for 3-5 minutes and she’d fall back asleep on her own. Now when I try she just gets ANGRY and works herself up, crying so hard she sometimes throws up. Good times. Is it teething related? Is she just doing it for comfort? Who knows. Call me crazy but I know this season is very short, and I know someday soon I won’t be going in for those extra night time cuddles. As for naps, she has dropped to one nap all on her own. We tried to get her to continue her two nap schedule but she was NOT having it and would scream and cry when we would lay her down for nap #2. So we’re just going with her cues. She is usually up for the day between 6:30am-7:30am and goes down for her nap around noon. Bedtime is still between 7:00pm-7:30pm. 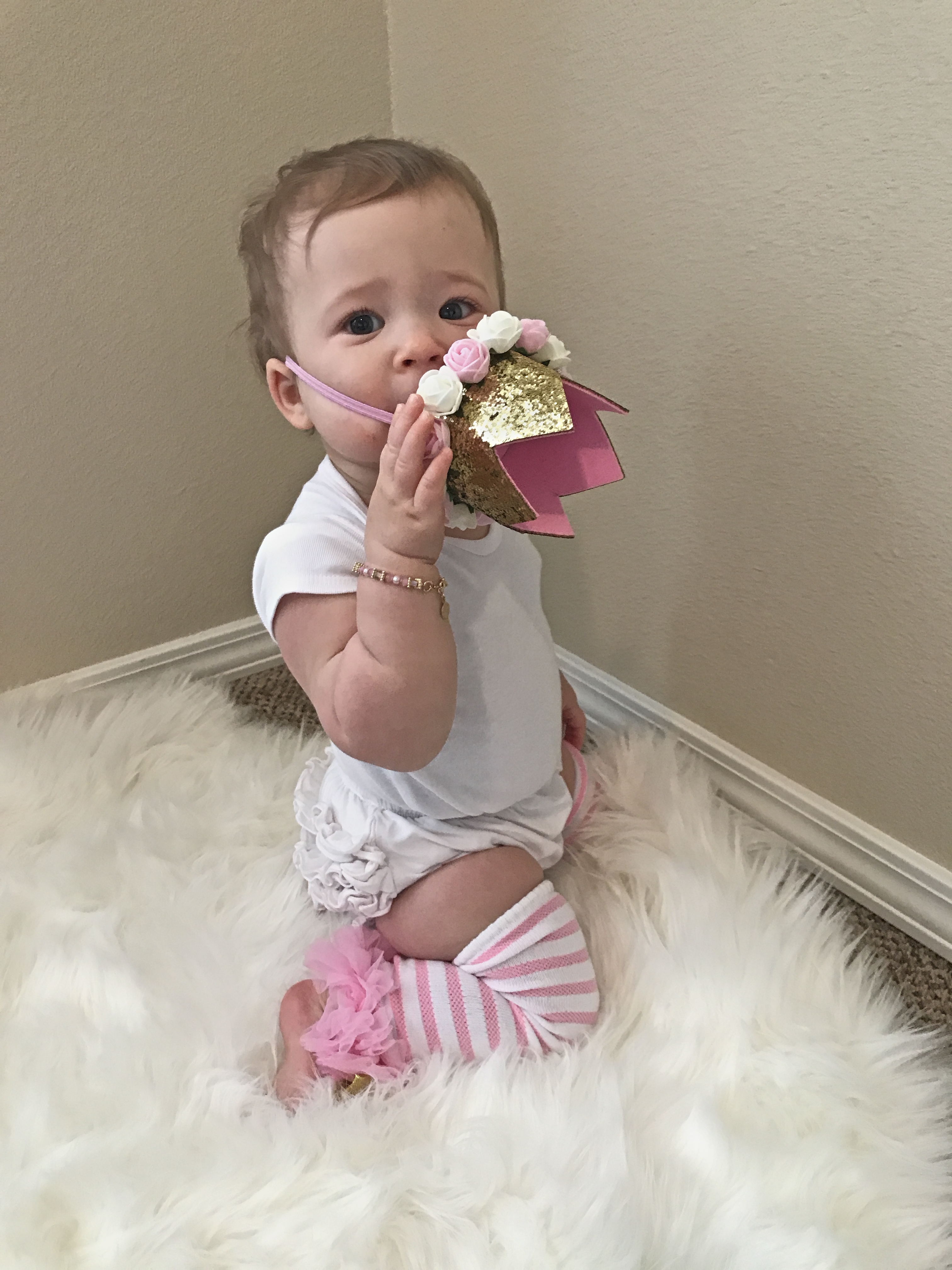 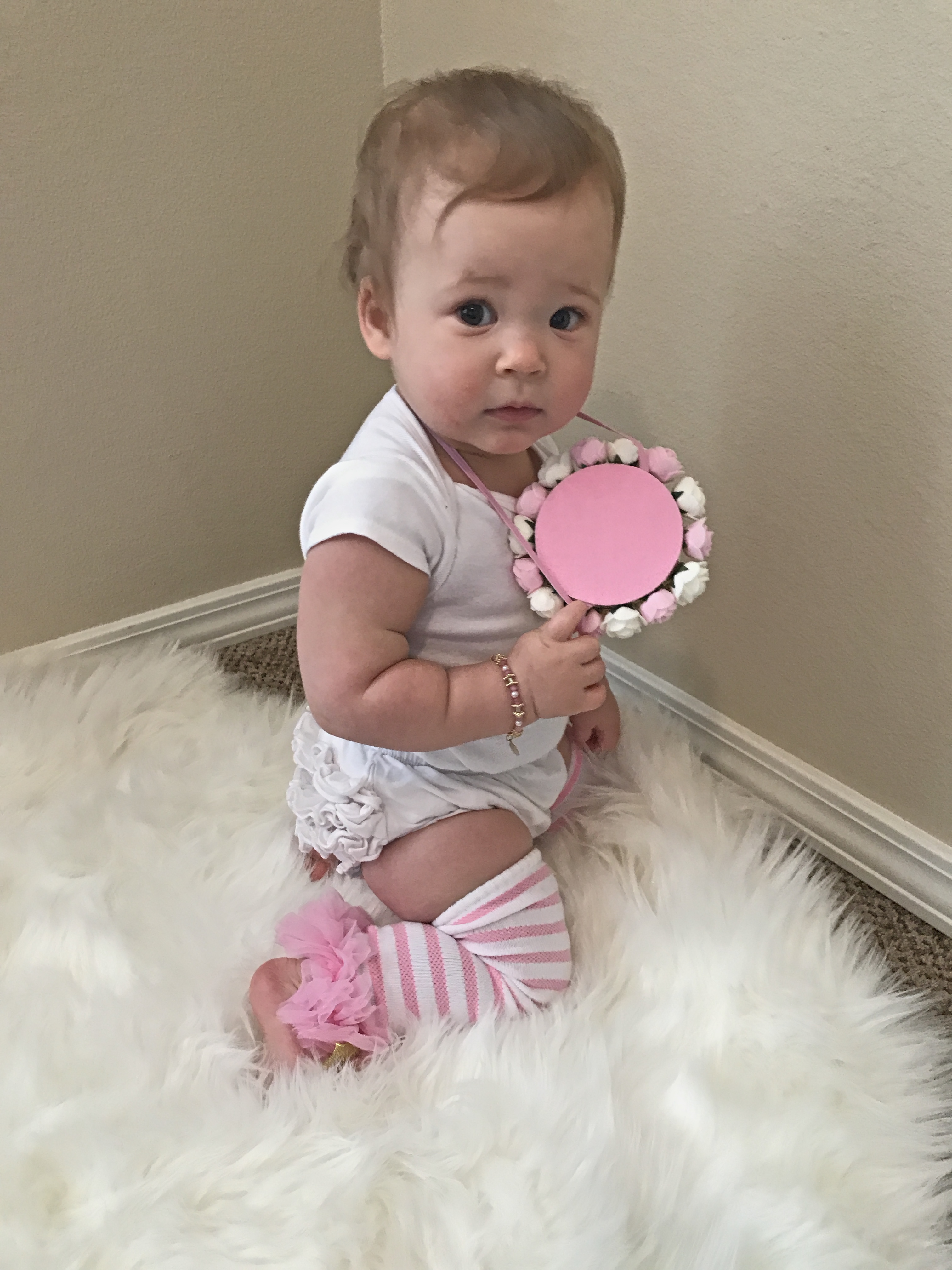 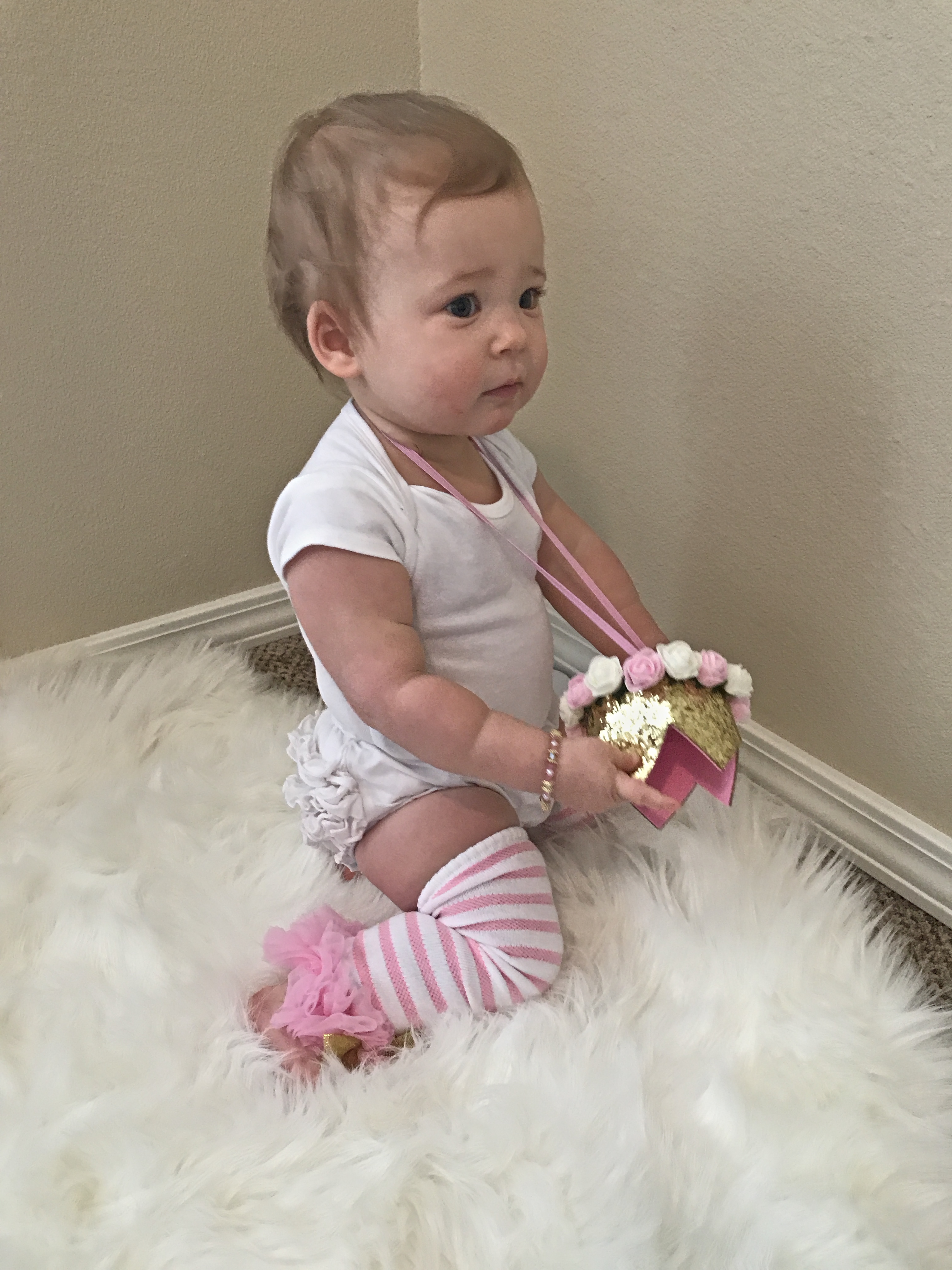 This is ONE 😂 I’m surprised she left the sticker and her crown on as long as she did!

And there you have it! It’s been so much fun documenting every step of the way. This won’t be the last! 😉 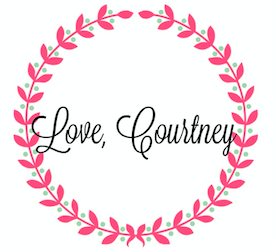