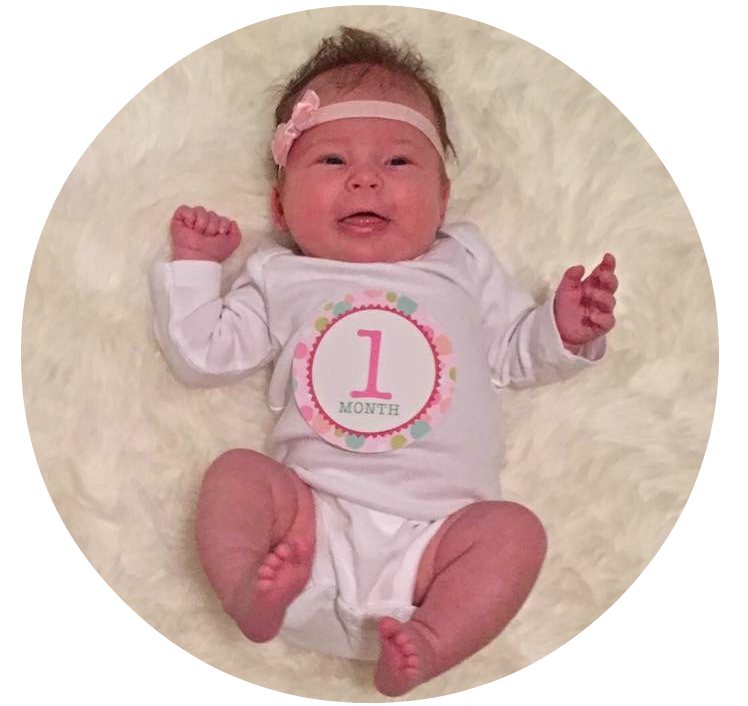 Our angel girl weighs 8lbs 10oz! She is our little snuggler and does not like to be put down. She isn’t the biggest fan of her bassinet and loves to sleep with/on Mommy and Daddy. She does like to be swaddled and womb/heartbeat sounds calm her down. We gave Juliette a paci when she was just over a week old. She has had no issue with nipple confusion as she also takes a bottle well. We had a lot of struggles with breastfeeding during the first few weeks but I will do a separate blog post since it’s a long story! At four weeks old she began wearing size 1 diapers and started wearing 0-3 month clothing. Juliette has been a ‘spitty baby’ since birth and we would constantly mention it to her nurses, lactation consultants as well as her Pediatrician. We would hear the same thing: it’s normal for babies to spit up. Due to the amount of spit up and the frequency we still weren’t convinced it was normal – more on that later! We had a lot of appointments her first few weeks of life due to slow weight gain because of the issues with nursing and spitting up. We also met with an ENT who diagnosed her with an upper lip tie but he did not feel it needed clipping. We noticed that Juliette has a birthmark on her left thigh. We had many late and sleepless nights while adjusting to parenthood and breastfeeding but we sure do adore our girl! 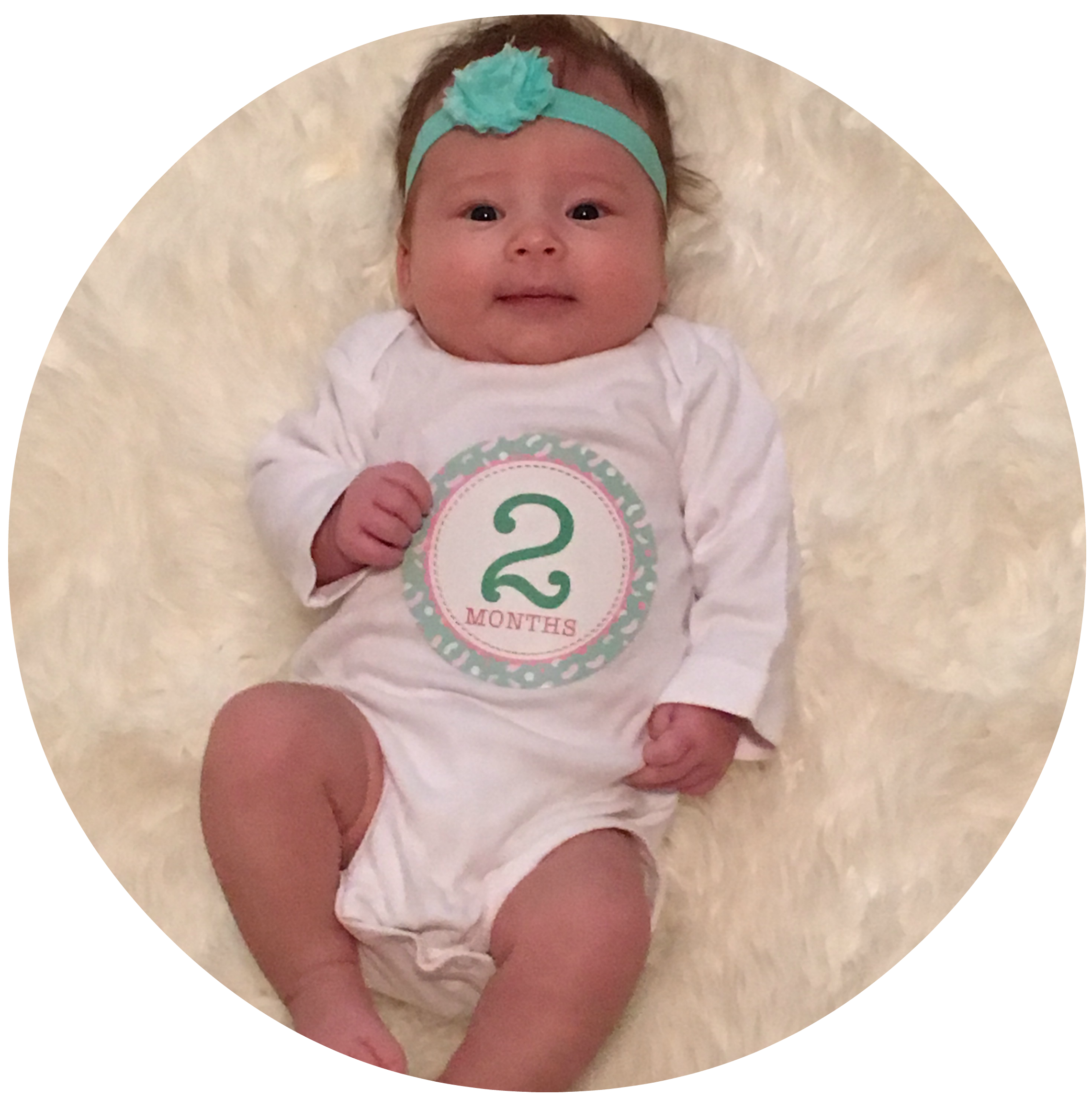 Juliette Paige weighs in at 10lbs 6.5oz. We are working hard on getting her used to sleeping in her rock n’ play (which we bought this month after we gave up on her sleeping in her bassinet). She gave Mommy the longest stretch of sleep yet. She slept 6 hours, nursed, and then slept another 4 hours! I felt like a whole new woman after that night! Most nights she is still sleeping 3-4 hour stretches. She still does not like to be put down but is lasting 10 or so minutes before she becomes fussy. She is starting to love her toys, especially her Minnie Mouse! She bats at her hanging toys and is starting to open her hands. She hasn’t quite figured out how to grab them yet but you can tell she wants to! She’s so strong and has been practicing tummy time. She has started to roll over from her tummy to her back! We love seeing her smile and see her personality start to shine. We found a game that she loves! We stick out our tongue and she grins from ear to ear and copies us with her tongue. We all get a kick out of it! She is starting to feel and knead her blankets and burp cloths. After continuing to tell her Pediatrician about her frequent spitting up we started her on Ranitidine for acid reflux. She still spits up but it is definitely less frequent and in less amounts. We noticed her hair is starting to fall out on the sides and is starting to get lighter, almost a strawberry blonde color in the light. Her Mumzies also noticed that she has a dimple on her right cheek when she smiles! We really feel that this month we started to learn our routine and get in the groove of things. Our sweet girl is more fun by the day! 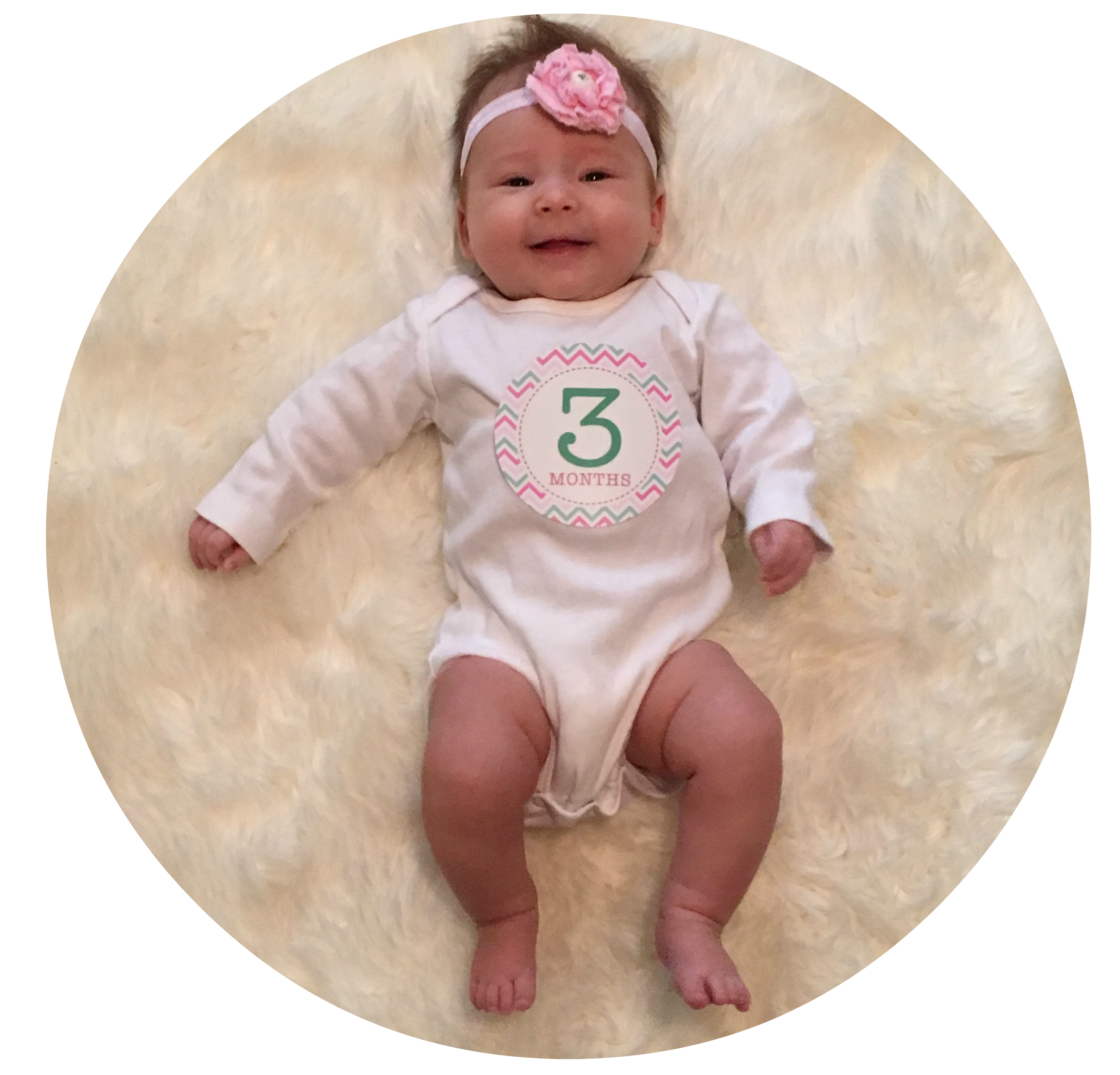 At 3 months Juliette weighs 11lbs 5oz! Boy, it feels like everyday she is growing and changing! She is so chatty and smiles all day long. She loves to chit chat and coo especially during diaper changes. She is so strong and can hold her head up on her own. We noticed that she is starting to teeth! She is very drooly and likes to chew on her hands and fingers. She chomps down when you rub her gums. One day I decided to look and you can see her bottom two teeth under the gum line (when she lets me look of course!) I wonder when she will finally cut them, whether it will be weeks or a few months from now. I cherish our mornings together when her Daddy goes to work. I bring her in bed with me and we snuggle and nurse before we really begin our day. We love to listen to Disney music when we play. So far her favorites are Hakuna Matata, I Just Can’t Wait to be King and Under the Sea! I cannot believe we have already been with Juliette for three months. We are trying to soak up every moment because it is truly going by so fast!