I know I am putting these up a bit out of order, bare with me! I’m still playing catch up 😉

I woke up on March 11, 2016 thinking I was going to head off to my OBGYN’s office to get established with her and to discuss getting pregnant. I had made the appointment two months prior (there is a reason why she’s so popular – she is excellent!) and the day finally arrived. It was a Friday morning and I had last taken a pregnancy test the Monday prior. Another negative, of course. It’s true when they say peeing on a stick becomes addictive when you’re trying! I thought, why not…let’s take another one so I can tell the doctor I had taken one that morning and it was negative.

Only this time, it wasn’t.

I set the test down to brush my teeth, completely expecting another negative like all the ones before. Seeing those two pink lines was a complete shock! I just stood there with my hand over my mouth in awe. I decided to bust out one of my expensive first response digital tests JUST to be sure. Sure enough ‘pregnant’ shortly appeared on the screen. 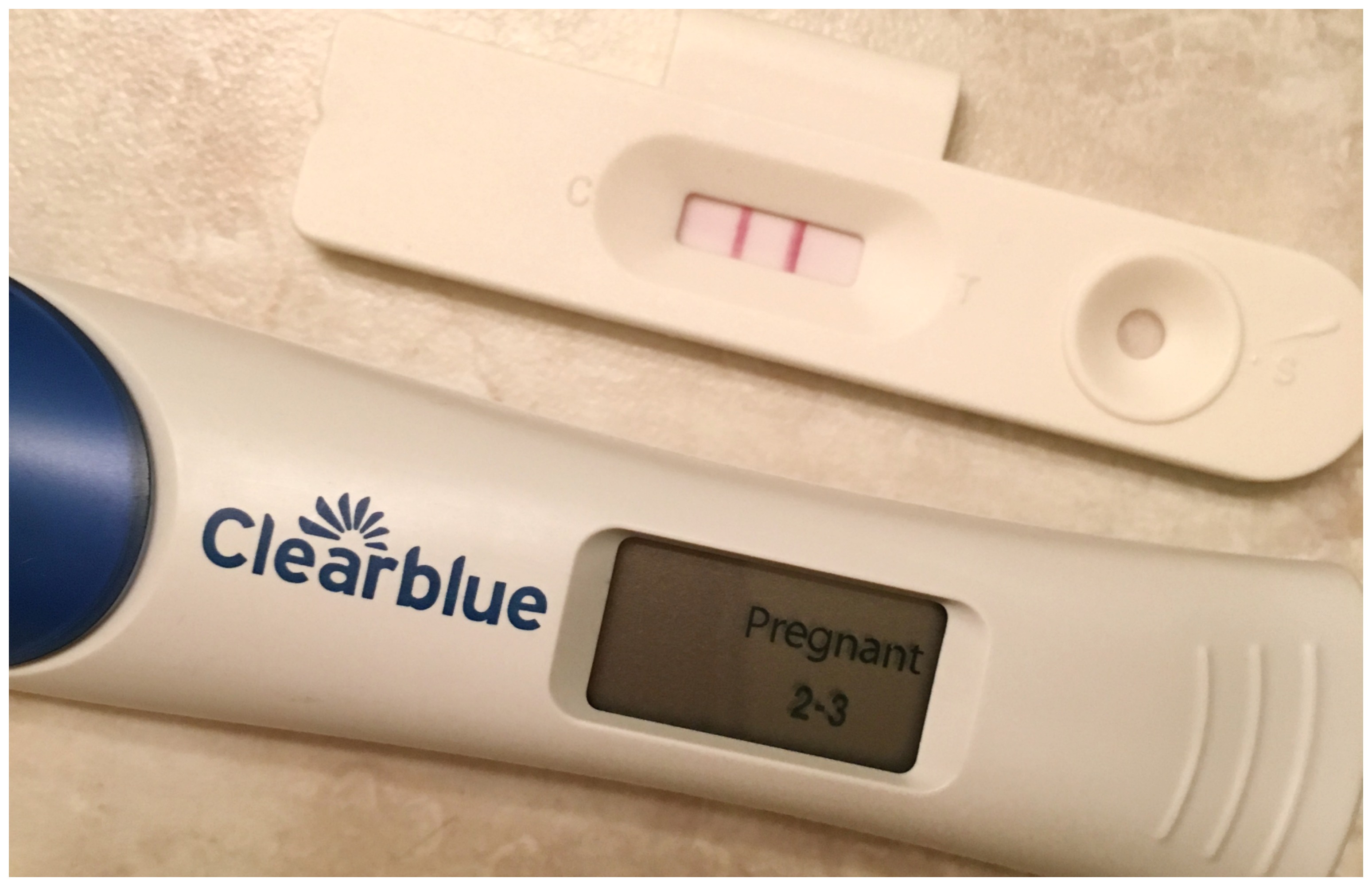 See, I was going to do some sweet extravagant reveal to Joren when the time came. That went all out the window and I ended up running into the bedroom, waking him up and showing him the test. Not the big Pinterest reveal I had imagined, but hey, it worked.

I don’t even remember the drive to the doctors office as I was still in complete shock. I had my appointment, took another test to confirm and was given a due date of November 17. Things were about to get real!

I was only just under 6 weeks pregnant when we had our first ultrasound. The tech took so many photos and it felt like forever before she said a word, which only made my heart beat out of my chest. I was already nervous enough to know if everything was okay. She finally turned the screen around and we saw a yolk sac and a tiny heartbeat flickering! I was over the moon! Of course she couldn’t give me any more details and said I would be hearing from my doctor. I anxiously awaited for two days before finally receiving word. I think I re-read the message 30 times. “I reviewed your ultrasound which shows a very early pregnancy at 5 weeks and 6 days, and the suggestion of a second yolk sac, which means possibly a twin pregnancy. It is too early to tell so you will need a follow up ultrasound.” We had to wait 3.5 weeks for that ultrasound and the suspense was killing us. In the end it turns out the second sac was there but was empty, meaning no baby ever grew. We were extremely thankful that we had one healthy little babe with a strong heartbeat. 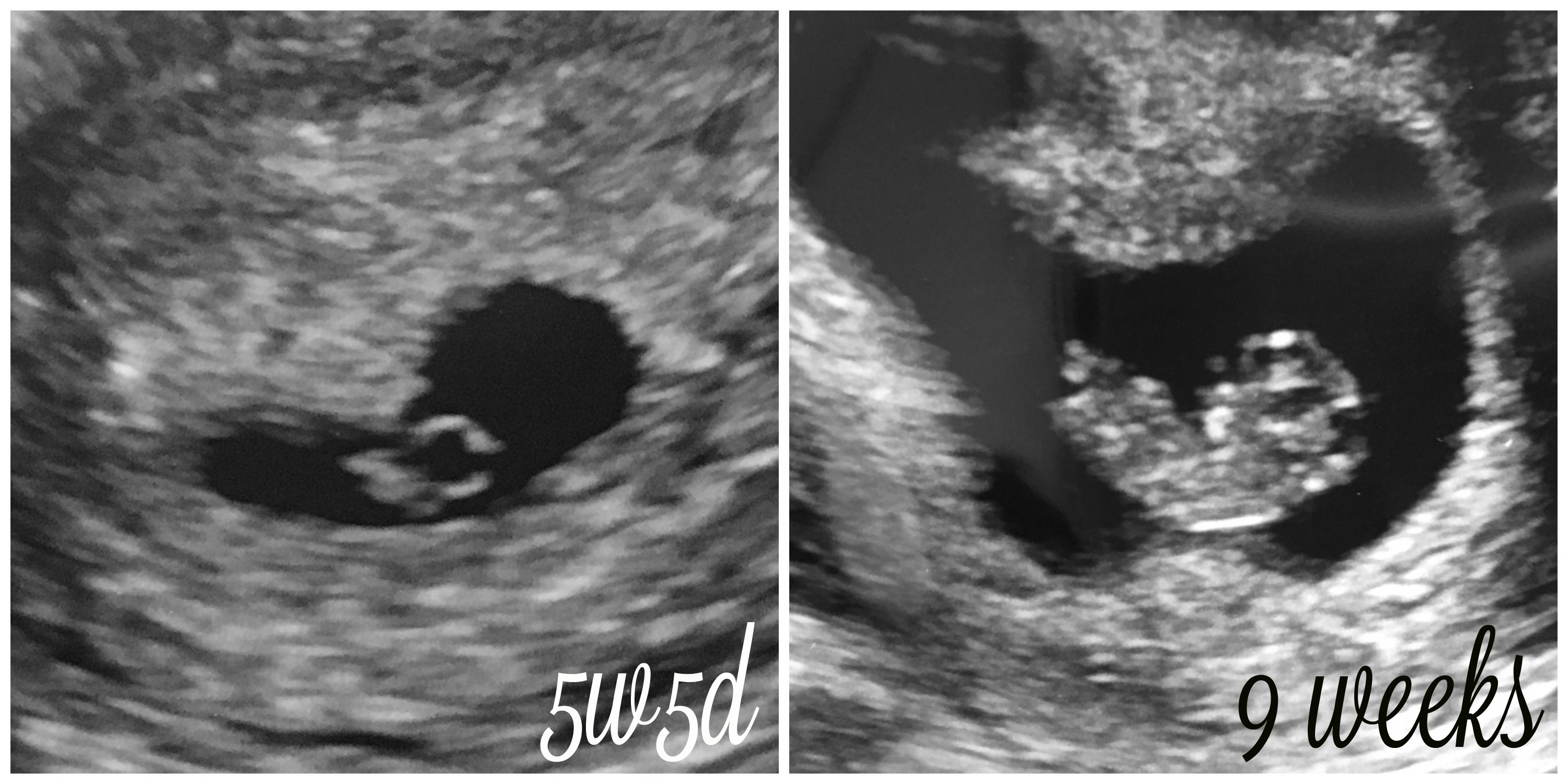 Life continued as normal as it took me a while to feel like I was pregnant. I felt very fortunate to have a smooth first trimester. I was one of the lucky ones who did not have any morning sickness, only feeling nauseous when my stomach was completely empty. The cravings hadn’t kicked in at this point but I did not want anything to do with meat of any kind. The thought of it could leave me gagging! I started my pregnancy at 115lbs and I gained 4lbs during my first trimester. One thing I can say is that I. Was. Exhausted. Most days you could find me curled up in bed with Netflix, dozing on and off. I can’t tell you how many TV series I finished during those nine months!

May rolled around and it was finally time to announce our pregnancy with everyone. We had already shared with immediate family a few weeks prior but I was chomping at the bit to share our best kept secret with the world! Prior to getting our positive pregnancy test we had booked a trip to Las Vegas. We ended up calling it our babymoon! I was 13 weeks pregnant at the time. I am glad the golden second trimester had begun when we were in Vegas because I had a lot more energy compared to my first trimester! According to my FitBit we did 20,000 something steps everyday! You can watch our Las Vegas vlog here!

Las Vegas wasn’t the only traveling I did with our baby bear! In June my Mom and I flew to California to attend my cousin’s baby shower. Our littles would only be two months apart! It was over that weekend that my bump finally made an appearance and I was so excited! I had been waiting for it. Let all of the fun photoshoots begin!

On June 30th we were finally going to find out if we were having a little boy or a sweet girl. It was a very emotional day for us and it is something that I haven’t shared with many…but I want my blog to be open and honest. I don’t want to forget a thing. The 20 week ultrasound was routine, our kind tech shared the wonderful news first thing that we were having our girl. He went over all of her organs, doing a thorough job of explaining what everything was and how it looked. He took his time measuring her bones and checking for different fluids. He took quite some time on her hands, which at the time I had thought was because she was being a little stinkbug and kept closing them and kept giving us the peace sign! He finished up and gave one last congratulations before sending the doctor in. She came in and sat down and shared with us that Juliette’s pinky fingers appear to be crooked, which is a sign of Down Syndrome. My ears started to ring and I was trying my hardest not to break down. She reassured us that it was the ONLY marker that Juliette had and that she does NOT feel she has Down Syndrome, but it would be wise to have blood work completed to be sure. I had the blood work taken and once we made it to the car I completely lost it. I felt like what was supposed to be such an exciting milestone in my pregnancy, the ultrasound that every new mommy looks forward to, was going to be a memory of my anxiety. I felt like I would not remember the joy of finding out we were expecting a baby girl but I would remember the day being overwhelmed. She was going to be one loved and adored little girl no matter what the circumstances but I was fearful. Several days later I was contacted by the office informing me that Juliette had 1 in 10,000 chance of having a genetic disorder. It was a long few days but I was extremely thankful to be reassured and to have my fears eased. 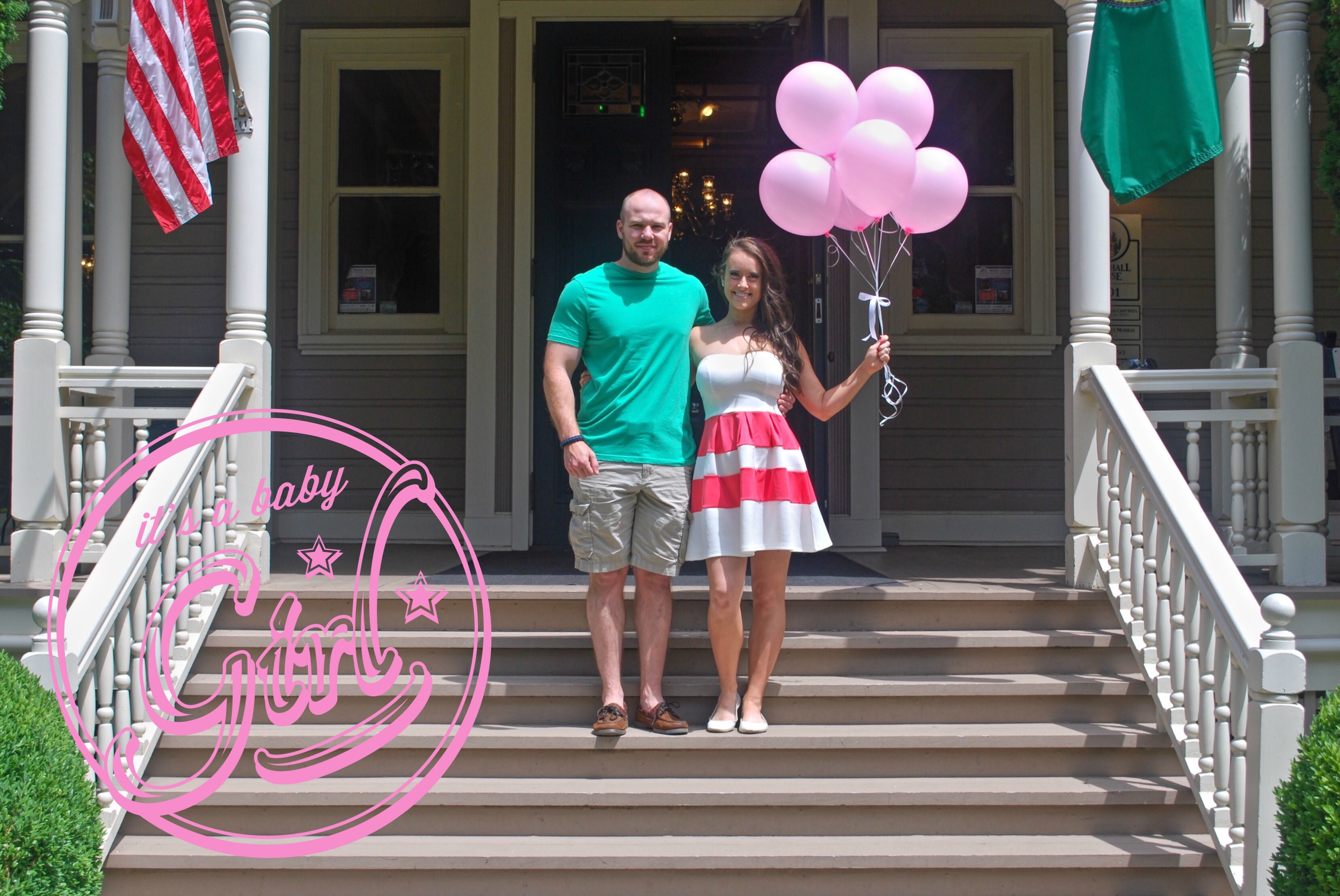 The following weekend we had a beautiful reveal party with both of our families! My Mom did an amazing job with her tablescapes and decor, as always. It was so fun spending the afternoon in celebration of Juliette. We had only shared with my Mom (she was the balloon filler!) so it was great to see everyones reactions when Joren shot it. You can watch our reveal vlog here!

I felt her first movements at 17 weeks and after that she was extremely active! At 18 weeks Joren was able to feel her move and at 23 weeks we saw my belly ripple from the outside. Juliette constantly had the hiccups and was a night owl – being very active in the wee hours of the night and early morning!

I spent the third trimester nesting, relaxing, shopping and GROWING! I was 34 weeks when I left my job at Rebound Orthopedics and was promoted to my dream career: Stay at home Mommy. My Mom (Juliette’s Mumzies) threw a gorgeous baby shower that was Once Upon a Time themed. It was a very special day!

It was in the third trimester that we completed her Cinderella nursery. I knew from the beginning that her nursery had to involve Disney in some way! She was already our little princess.

It was around 34 weeks that I really started to feel large and in charge. I tried to remain active during the entire 38 weeks but unfortunately my Carpal Tunnel flared up and I wasn’t even able to do yoga – my go to workout during the last bit of my pregnancy. I ended up gaining 37lbs total.

The last few weeks I felt the exhaustion like I had during the first 12 weeks. Good thing for Netflix! During the last trimester my pregnancy insomnia was out of control. I was exhausted all day but come nighttime…I was wide awake until 4:00am. I spent late nights cuddled up on the couch, binge watching whatever series I happened to be on at the time. I could not get comfortable due to my low back and hip pain. It so happened it was in that exact spot on the couch where my water broke at exactly 38 weeks pregnant…but more on that in my birth story! 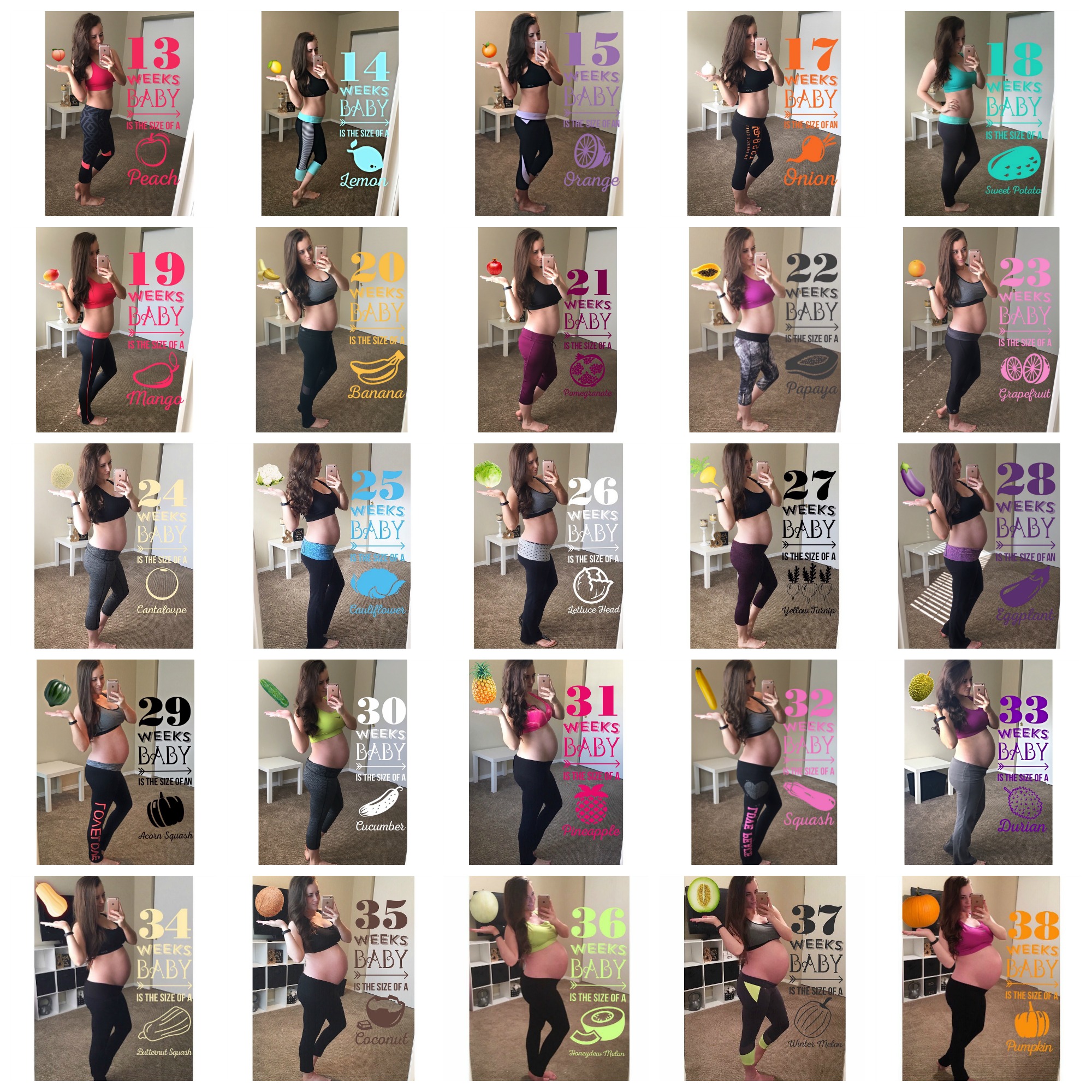 I had so much fun capturing my bump each week with my fruit/veggie pictures! They are some of my favorites to look back on.

I was fortunate to have my Mom and my good friend Amanda take a lot of pictures for me! I had to capture my growing belly every step of the way.

I absoutely loved everything about being pregnant. I was so anxious to meet Juliette but I soaked up everyday that she was in my belly! I was always imagining how she would look and wonder what her personality would be like. I had so much fun documenting with photos and videos. Now that she has arrived I love looking back and I am excited to share all of these beautiful memories with her one day!