So far these updates have been relatively boring, which I am extremely thankful for, but we had a bit of an experience during this month. After all of our family went home on Christmas Eve (we hosted for the first time!) I started to get ready for bed when I noticed I had been bleeding bright pink blood. I immediately called the on call physician who told me that while it can be alarming it doesn’t seem as though I should be concerned unless it continues, becomes bright red and/or is associated with contractions. She did tell me it wouldn’t hurt to come in and be checked if that would make me more comfortable. I decided to watch it throughout the night. Sure enough, I continued to spot the next morning.

Not only was I worried about why I was bleeding but I was worried because I did not have my Rhogam shot yet (Rhogam prevents a Mother who has a negative blood type from making antibodies during her pregnancy in the event her baby has a positive blood type) so I called the on call physician again who advised me since I was bleeding I had 96 hours to get the shot to protect the baby.

We went on with our Christmas festivities and I continued to bleed so I told Joren I wanted to go in and make sure everything was okay. Leaving Juliette and our family on Christmas Day made me very emotional but I knew I needed reassurance and peace of mind that Dawson was okay.

I was hooked up to the monitors and all of my vitals were taken and deemed normal. Dawson’s heartbeat sounded good – the nurse actually told me that his heart rate accelerations were very strong for 28 weeks, saying they aren’t typically that strong until at least 32 weeks. Go baby go!

I continued to bleed while in Labor and Delivery so the on call physician ordered an ultrasound to see if there was something going on with my placenta. He advised depending on my bleeding and the results of the ultrasound I may need to be admitted for observation. And the thought of that made me upset. I did not want to admitted yet and I especially did not want to be away from Juliette, especially on Christmas Day.

They wheeled me on a gurney several floors up to radiology and I felt like I was on an episode of Grey’s Anatomy. That was definitely a first! The ultrasound tech spent a decent length of time looking at Dawson, my placenta and my cervix. We were not planning on having any more ultrasounds so I was hoping we could take a peek at his face since he didn’t cooperate during the anatomy scan. Apparently he wants to remain a mystery because he hid his face the entire time!

We were brought back to Labor and Delivery Triage and I was hooked up to all of the monitors again. They also drew blood for an antibody screen and gave me my rH injection. The doctor came in, after what seemed like eternity waiting for the Radiologist to read my report, and advised us that everything appeared normal. Since my bleeding was darkening (meaning no fresh blood) and Dawson looked great I was able to go home and spend the rest of Christmas with our family.

We still aren’t 100% sure what caused the bleeding but we’re thinking it may have been overexertion. Between getting ready for Christmas and hosting Christmas Eve, along with Dawson being so low, blood vessels may have burst. I was not put on any restrictions but was told to take it as easy as possible.

Anxiety/Emotions: I am starting to think about labor and delivery and for some reason I am more anxious this time around…that I can remember at least. I think it may be because I have done it before and I know what to expect versus being a first time Mom and just going with the process. Plus, the unexpected bleeding incident and going into the hospital didn’t help matters any!

Pressure/Cramping: The third trimester brought on even more pressure and cramping. I know Dawson is running out of womb and its surely tight in there, but it’s more then just his strong movements and kicks. They are often painful since he is so low. My OB requested I start to wear a pregnancy support band to hold Dawson and my uterus in place. I am hoping that relieves some of the pressure.

Nesting: During week 28 I had the desire to get organized and the need to declutter and tidy everything! I set out my hospital bag as well and began to fill with items I knew I wouldn’t need between now and the delivery. I especially wanted to get it prepared after our unexpected visit to L&D. 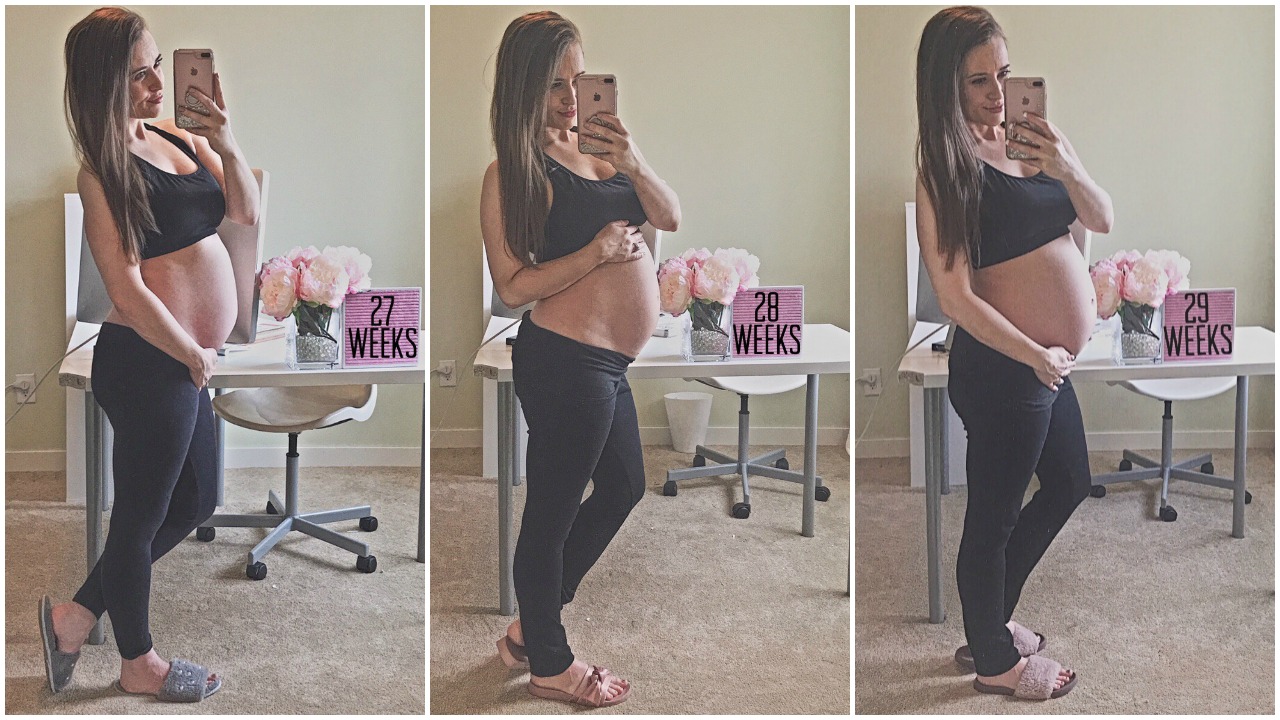 THE BELLY: My Linea Nigrea line showed up at week 28. Week 30 my belly really popped.

WHAT I’M WEARING: During the day you can find me wearing leggings and hoodies that still fit me! At night I sleep in flowy loose tops and boxers/underwear. TMI? 😆 Everything is tight at this point!

During my 29th week I took the glucose tolerance test, failed, and was diagnosed with mild Gestational Diabetes. It has been a challenge but I know I will do whatever it takes for our health. I wrote a short blog post here about my initial thoughts after being diagnosed.

My OB said she wanted to order an additional ultrasound at 35-36 weeks to check on Dawson’s growth – but that was before we knew I was diagnosed with GD. I hear Mother’s who have GD have more ultrasounds and non-stress tests toward the end. She also said he may come around 38 weeks like Juliette. We shall see what is in store these next 8-10 weeks!

We celebrated Dawson at our baby shower during week 30 and it was absolutely perfect!

CURRENT FEELINGS: I have definitely been emotional and anxious these last few weeks – and then only heightened by my GD diagnosis

SLEEP: It is getting harder to roll over in bed with this growing belly! Oh, and the sound effects!

HIGHLIGHT OF THE MONTH: Celebrating at our baby shower!

LOW OF THE MONTH: The unexpected visit to the hospital and being diagnosed with Gestational Diabetes

OBSESSING OVER: We finished his nursery at 30 weeks! It’s everything I wanted!

MISS ANYTHING?: Being able to move and function comfortably. All of the food I cannot eat now while watching my levels.

FOOD CRAVINGS + AVERSIONS: I have been obsessing over chicken salad sandwiches! I think it will get me by until I can have my beloved deli sandwiches again. Craving sweets still, especially now that I am limited.

LOOKING FORWARD TO: Entering month 8 and the home stretch to meeting my handsome boy!